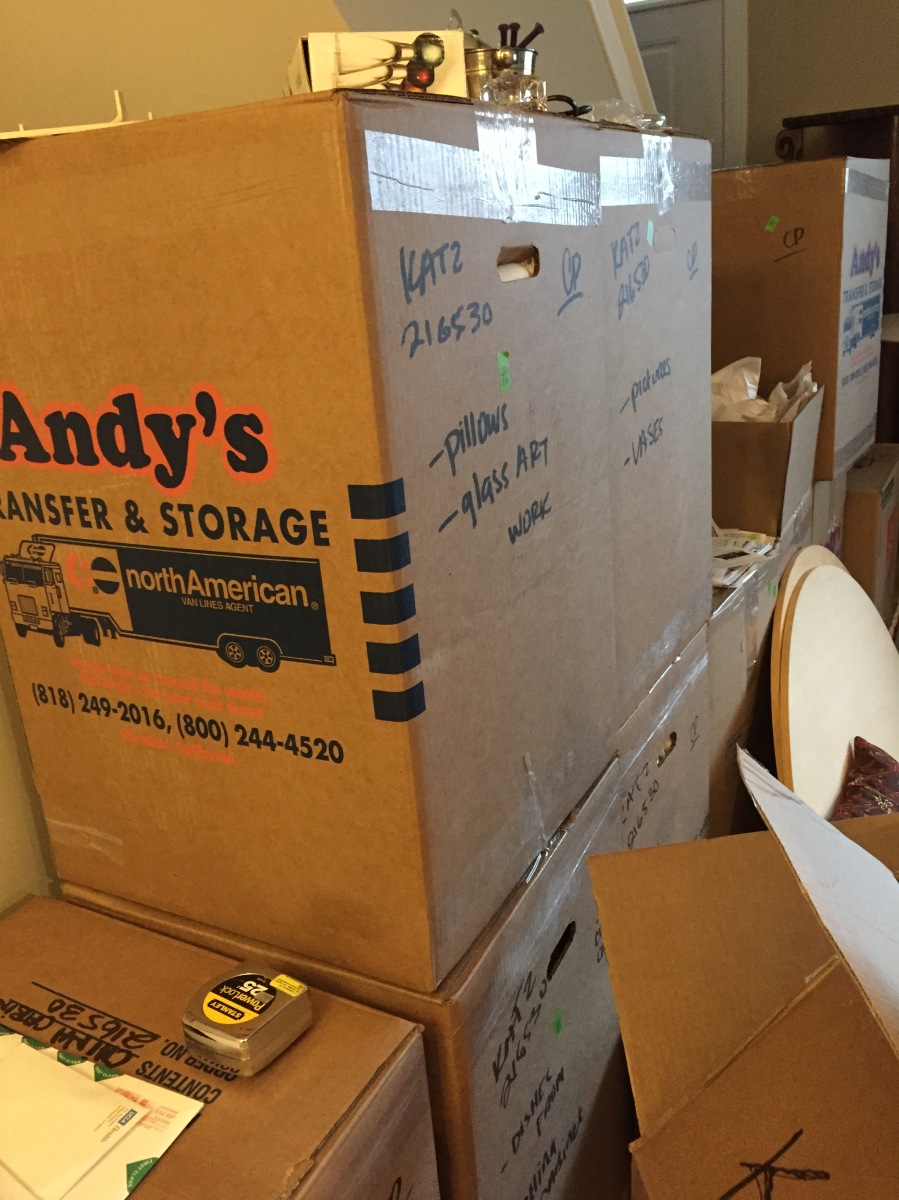 I went off to spend a few days with Aunt Judie as I shared with you in my last post.

I had lunches with Stacy and Valerie, and dinners with Aunt Judie and Phyllis.

I did several loads of laundry for Aunt Judie, making sure the pile was depleted before getting back in the car 8 days ago, and heading back to the extended stay hotel.  Why, hello Candlewood Suites!

I was approximately 5 minutes away from Aunt Judie’s house, when my phone rang. As I was driving a borrowed car, that would not sync my phone, I pulled off the road to answer.  SpecialK called to inform me the movers would be a day earlier than expected, and would arrive on Sunday.

I drove back to the hotel, and did our last load of free laundry.  Life became a whorlwind.  Saturday morning, I test drive a Ford Focus and then a Honda Civic.  We bought the Civic!  We then went to Costco, to load up on necessary things, toilet paper, paper towels, laundry detergent.  Somehow $250 didn’t go nearly as far was we hoped!

After loading up on all those ‘necessaries’, we came to the rental center to collect our keys.  The rental center opens up at 11:30 a.m. on Sunday’s, the movers said they would be there at 11:00 a.m.

Sunday morning we packed our bags, all 9 of them, and arrived at our next home. (SpecialK had checked 3 bags, I checked 2, and we each carried 2 bags.  That equals our 9 bags).

On Monday, SpecialK left for work, and ignoring one box of fragile things, I unpacked every box in our bedroom, putting away all of my clothes.  Then I attacked the boxes in the guest room.  By 11:30 a.m.  All of the boxes, except that fragile one were unpacked and flattened, Witt wrapping paper strewn about.

Monday evening SpecialK flew off for a business trip.  While he was gone, I was in an unpacking frenzy.  Every kitchen box was unwrapped, with the papers shoved inside the boxes.  When SpecialK came home from his business trip, he was greeted by a mountain of unpacked boxes.

On Wednesday, we went and received the Civic.  It is shiny and new.

I drove myself around Thursday in a car that was not rented or borrowed for the first time since I sold my Acura.

Fast forward to Saturday, today.  There was snow on the top of that Civic, but we were moving too fast to stop and take a picture.  We went out and ordered furniture, some to replace the furniture I had sold before leaving CA.

That was my past week.  That wall of boxes waiting to be unpacked?  They are waiting for another cabinet, ordered today, to be delivered.  I know better than to leave our delicate China on the floor for SpecialK and /or I to mistakenly trip over!

How was your past week?  Do anything exciting?

Follow Two From Natick Live Healthy on WordPress.com
Two From Natick is a participant in the Amazon Services LLC Associates Program, an affiliate advertising program designed to provide a means for sites to earn advertising fees by advertising and linking to Amazon.com
%d bloggers like this: